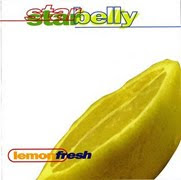 As I've mentioned previously, the element of time hovers over Inventory and, correspondingly, over many songs in the soundtrack.

Starting with an urgent gasp of breath and the line "I fear every day, we're wasting our time away," Starbelly's "This Time" confronts the topic every slacker is dedicated to avoiding, especially slackers on a deadline they're not necessarily inclined to meet.

For some reason, I keep waking up in a world where songs this catchy somehow weren't massive hits. Weird, isn't it?

Starbelly's Dennis Schocket confirms that the concept of time was very much what drove the song's creation. As a film team that's made numerous movies for timed film competitions... and even a complete feature film in two weeks, we can very much relate to the challenge he set out for himself!

I had written a bunch of songs for the first Starbelly record (Lemon Fresh) and was playing them for my friend and producer Andy Bopp.

Feeling rather smug with the fact that most of the tunes clocked in at under three minutes, (very desirable for a pop song) I was surprised when Andy quipped "Yeah, but can you write a great song that's under TWO minutes?"

On the way home from the studio, I began my quest to write the perfect two minute pop song. When I sat down that evening to write it, I was anxious. I only had about an hour to spare. Don't waste time here. Hurry up and get something down, damn it! I thought "Cut the filler. Cut the fat."

How does one do this? Well.... Intro? No intro. Get to the point. Hit it hard and then get to the chorus. How about a bridge? Nope. No time for a bridge. Solo? Sure. Make it quick though. Subject matter? This is a song based on time restraints. Hurry up. Don't waste time. Make the most of what you have with whom you have it. "This clock ticks by. I stop asking why. This Time is for you."

There it was. It had come very easily. I thought "I did it! I can't wait to record this tomorrow." I called Andy. "I'm coming over tomorrow. I've got the perfect two minute pop song." Written and recorded within a 24 hour period! Awesome. As we listened to playback, I was happy with the results. Nice melody and nice chorus I thought. Oh, by the way, check the ticker. Did I do it? Is it under two minutes? The answer is...... FAIL. The damn song clocks in at 2:03. (The quest continues....)

Posted by Justin Fielding at 1:33 PM