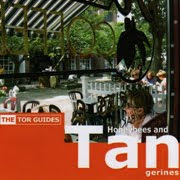 The quest for perfect soundtrack songs is a journey within you and without you. One scours one's brain and record collection and also wades out into the great unknown.

Until its recent, lamented demise, Bruce Brodeen's Not Lame Recordings was the place to start any search for new powerpop horizons.

Three songs in the Inventory score were originally released on the Not Lame label ("Kill, Kill, Kill" by Martin Luther Lennon, "This Time" by Starbelly, and "Timpani Heart" by The Sun Sawed in 1/2).

Still others are from bands I'd learned about over the years from Bruce's online and personal recommendations, as Not Lame was also a retailer of powerpop from other labels, many of them small, with artists known largely due to Bruce's efforts. I have him to thank for turning me on to great bands like Cotton Mather, Splitsville, The Sugarplastic, and Tiny Volcano.

But the songs in my brain and record collection needed to be supplemented, to cover all the cues we had to fill.

I set the bar very high. I wasn't just looking for solid pop or pretty ballads. What I sought was effervescence. Friends who know their way around good powerpop sent me tons of really good recommendations, but good wasn't good enough. I wanted songs that got airborne! Music that soars the way Badfinger's "No Matter What" soars, the way the Raspberries' "Go All the Way" soars.

I clicked through hundreds of samples on Not Lame, searching for that sugar high. One click stood out from all the others, a song called "You (and Everything You Do)," by The Tor Guides, from Sweden.

Before four bars of quick strumming are done, Torbjörn Pettersson beams us straight to the middle of powerpop utopia:

"And there's a song I know, and you can hear it on the radio-oh."

Oh, to live in a world where such music is on the radio-oh!

The Tor Guides album containing "You" was released by Jam Records, which led me to contact Jeremy Morris. Jeremy put me in touch with Torbjörn, who tells us about his cool summer breeze of a song, which now plays under Inventory's end titles:

The Tor Guides was initially a loose project I had been working on since the mid 00's. I had decided to have a go at finally finishing up a full CD as opposed the zillions of half-finished demos I had been leaving all around through the years, both before and after. I had demoed some songs that were chosen for the recordings and handed a copy of the demoed songs to my good friend and drummer Björn Höglund, who was to help out with drums and percussion; I had planned to play pretty much everything else myself.

We then recorded the demoed backing tracks for the album that eventually was to be our first CD, “Honeybees and Tangerines”, released by Jam Recordings in 2007. Although we were all satisfied with our efforts, I decided to have a go at an old idea of mine that had been haunting me for some time and had not been previously demoed. I grabbed my acoustic guitar and Björn sat down by the drum set. I told him, we were to record an uptempo, positive song—and then I counted us in, just like Dee Dee Ramone would have done. We recorded the backing track in that one take—actually the first and latest (if not the last) time the song has been played at all!

That final song, “You (And Everything You Do)” immediately sounded great in its clear simplicity. It was a joy to work on the many layers of vocals and the guitar and keyboard decorations of the backing track. For the lyrics of one verse, I borrowed the opening line from Elvis Costello's 70s ad campaign, "surfing on the crest of the new wave," pretty much in the same way he once borrowed one-liners from the old Motown hits of the 60s.

When finalizing the lyrics, I tried to emphasize the positive spirit of the music. It didn't take me many minutes to assemble the odd words of the lyrics and even though they might not make too much sense, I firmly believe all those positive elements are evident. Lyrics in pop songs shouldn't make that much sense, anyway…

The cover art for “Honeybees and Tangerines” was finalized by Phil Denton/MrQwerty, an old friend from the UK and the Audio Galaxy heydays. He also provided me with the band name Tor Guides, after long e-mail discussions on the subject.

It seems as though the song has caught on. Some years ago it was included in "Sweet Relief," a compilation album released by Jam Recordings to benefit the victims of the Katrina hurricane. I was then greatly honored and thrilled when being asked if the song could be included in the soundtrack of Inventory, together with so many great bands.

So, what was once just an odd musical idea in the mind of a Swedish pop nerd, has found a life of its own, which—if nothing else—goes to show that all good pop matters matter!

You can hear Tor Guides at @ www.myspace.com/torguides

Posted by Justin Fielding at 7:17 AM