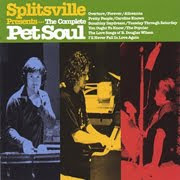 One of my major goals for the Inventory song score was to include tunes that evoke a happy-day feeling, the spirit of a song like ELO's "Mr. Blue Sky" or Pilot's "Magic."

In that vein, Splitsville's retro-60s "Sunshiny Daydream" instantly colors an interlude of outdoor hijinks all paisley and summer-of-lovely.

Rob Toomey, Splitsville's manager, shares some background on the album from whence that infectious smiley smile of song comes:

Way back in 1998, Splitsville recorded a four-song EP as a loving tribute to the Beach Boys and the Beatles. Dubbed “Pet Soul” (a nod to Pet Sounds and Rubber Soul, obviously), this EP was distributed for free to attendees of that year’s Los Angeles Poptopia festival. The EP started getting passed around, and this tribute created considerable buzz within the power pop community.

In 2001, after the release of Repeater, Splitsville decided to return to the EP “Pet Soul” and further mined the vein of 60’s rock. The Complete Pet Soul was released to international critical acclaim. The album featured four songs culled from the Pet Soul EP, plus six new originals and a cover of Burt Bacharach's "I'll Never Fall in Love Again". This cover previously appeared on the Burt Bacharach tribute album What the World Needs Now and was later featured in the Kirsten Dunst movie Get Over It.

Paul Krysiak has stated that The Complete Pet Soul is, "...entirely about concept - the 1966 album that never was."

Allmusic gave the CD a rating of 4 and ½ stars, stating "...the (original) orchestral tracks are nicely balanced with several new songs that recall the low-voltage, almost folk-rock sound that predominated on the original U.S. edition of Rubber Soul."

As for the track “Sunshiny Daydream”, you’ll hear the influences on the first listen. You’ll hear more on the second and the third. You’ll just have to listen for yourself.

“Sunshiny Daydream” can also be found on the Popboomerang/Zip Records release, Let’s Go! The Best of Splitsville

Posted by Justin Fielding at 6:16 PM