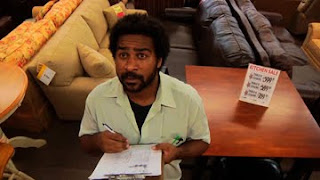 To know Quentin James, or to see him on film or stage, is to love him.

He has a unique mix of gentle charisma and gravitas—see his performance as "Cautious Friend" in Esc—that makes for characters the other characters just have to love.

It takes no suspension of disbelief to imagine his co-workers are bummed that this inventory day is his last day at the furniture store.

Paired with profane martial-arts fanatic Jackie, Quentin's Tucker is the only clerk in Inventory's "island of misfit slackers" whose response to getting a pen and a clipboard full of inventory sheets is to count the furniture.

As Jackie whips her nunchucks around and pushes the too-much-information envelope, Tucker's Aikido-like nature is put to the test.

Quentin on his experience in Inventory:

I had a great time working with Justin and the entire cast and crew on the film Inventory. When he called me and described his objective and process of organically creating a script and character I was very excited. Creating and playing Tucker was a fun challenge. (The easiest part was coming up with the name.) He has an aloof likability that I think comes across on the screen.

An initial fear I had was that people would mistake his kindness for weakness, but with the backstory Justin and I created I realized that Tucker had long ago stopped worrying what people thought of him. He had been through too much and was very content with where he was headed with his life. If anything, for me as a performer, it was an exercise in patience.

I had the pleasure of being paired with Shelly Nun Chucks Finnegan. I love Shelly. She’s funny, honest, and interesting. And she’s also a little crazy, but only in the greatest kind of way. The only thing I learned to expect when improvising with her was the unexpected. Definitely kept me on my toes.

Sometimes I was just along for the ride. When we auditioned together, I recall on more than one occasion thinking and saying to her after one of her many unique diatribes, "Well... I’m not really sure how to respond to that." Quite a funny audition. Ultimately, I believe the relationship worked well.

Jackie/Maria helped shape Tucker. I learned a lot about him through his interactions with her. (You may have heard by now that Nun Chucks is a fan of Jackie Chan. This is a gross understatement. I have met few people in my life who like anything as much as Shelly likes Jackie Chan. Mr. Chan, if you happen to be reading my Inventory recollection post please do the entire world a favor and come meet this girl. She’s one of a kind.)

Overall, I am very grateful for the opportunity to work with such a group as the people at Castparty Productions. I was so impressed with the level of talent and dedication of all involved that I can only hope for more opportunities of similar value in the future.

Posted by Justin Fielding at 6:48 AM