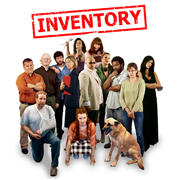 As we were in the thick of improvising, re-improvising, writing, and shooting Inventory in the summer of 2009, a title-song composition quickly snowballed from concept to completion.

The driving idea was to blend the borderline smarmy sympathy of the "Cheers" theme with the peppy powerpop of the "Friends" theme. The lyrics are full of wordplay on the workin' life, with a second voice commenting on the logic of what the first voice is saying.

Many of the words relate to defining traits of Inventory characters, so as soon as the ink was dry on the lyrics, Kevin Hammer and I mapped out plans to illustrate each major Inventory character in a title animation, synced to the song.

Kevin, master of all things musical, produced my title ditty and played all the instruments, and he adapted the theme into countless variations for use in the underscore. Dennis Hurley, in-character as "Percy," accompanies me as the second vocalist.

Where there's a self-proclaimed Ukrainian hip hop star ("Nastasia" played by Katarina Morhacova), there's liable to be a Ukrainian hip hop song. So, Kevin and I wrote "Kickin' Kiev," inspired by "Love of Three Oranges" by Prokofiev (born in Sontsovka, now Krasnoye, Ukraine). It just may have more rhymes with Ukrainian geographical names than any English-language song in history, but I stand to be corrected on that. Kevin again produced and plays all instruments, and Katarina sings or raps or hip hops or whatever the contrarian Nastasia would call it.

Both songs are credited to "The Bad Pixels," with Dennis and Katarina as guest vocalists.
Posted by Justin Fielding at 11:54 AM