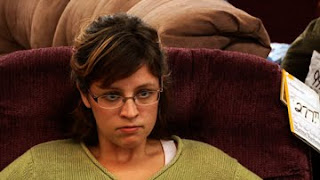 Possibly the hardest role to play in Inventory was Eleanor Stanley.

In the mix of characters, we liked the idea of teaming a clerk who was chronically sad with her sarcastic ex-boyfriend—the last people in the store with whom either would want to be paired.

Going into the improv and reimprov armed with little more than sorrow was a palpably challenging task. Exhibit A: the actress who started developing the role in rehearsal dropped out before we started shooting.

We knew Amanda Hurley, who was achingly sympathetic as the victim of her mother and sister's verbal abuse in The Observer, had the chops to do it.

Though in real-life, she has a very sunny demeanor, she took to the character's sadness in a way that was so real, I was afraid we'd never see her charming smile again. So, I was very glad to read her account of the journey she went through playing Eleanor:

I joined Inventory a bit late in the process, so I was still continuing to develop my character as we filmed. One lesson I learned about playing a, for lack of a better term, "sad sack" character is that it can be hard to shake. I ended up going home with the pout on some nights.

Eventually I found that the fun in playing Eleanor was finding that light at the end of the tunnel. As I focused more on her journey towards the light, I started enjoying myself a lot more. Also, I found that with Eleanor, in those rare moments in which she showed some spunk and actually stood up for herself, she really got to shine.

No, she wasn't constantly hilarious and sarcastic like Ken Breese's character, Chuck, but when she had something to say, she was heard. I guess what I learned from her is that we all have a voice. You can feel weak and powerless as a human being, but it is only a feeling. We all have power even if we can't see it in ourselves. Eleanor is in a bit of a fog (of depression) in the beginning but once she gets out you really get to see the person underneath. And the best part is, the audience, I feel, will really root for her because the whole time you get these little glimpses of the true (better) Eleanor and you really root for her and want to see her emerge and shine.

Posted by Justin Fielding at 9:53 AM