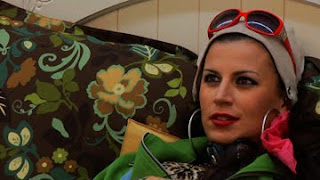 A few years back, when we were planning a feature-length film that didn't ultimately come to fruition, Katarina Morhacova wowed us in the audition and won the female lead. She subsequently moved from Boston to New York, and we never got to work with her as we continued to make short films and, finally, our first feature.

When we began casting for our second feature, Inventory, we were thrilled that Katarina signed on and would make several trips back to Boston to rehearse and perform in it.

She was also a key member of the story team at the project's most critical moments. We needed to go into hyperdrive and make fast, good decisions in choosing and structuring the beats we improvised and reimprovised in whirlwind rehearsals during our first days on location. A veteran of many stage and screen productions, Katarina dedicated herself to helping make sense of the tornado of ideas in flux in those heady days. Since access to the cast was extremely limited, the pressure was on to make the most of that moment of opportunity, and she was a trouper on both sides of the camera.

As I've noted elsewhere, the first question for every Inventory castmember was:

What character would be fun for you to play... and fun for the audience to watch you play?

Unique among the players in Inventory, Katarina brought to the film a character she already had in development, Nastasia: a self-centered, self-proclaimed hip hop star from Ukraine.

We paired Nastasia as the counting partner of Bess (Irina Peligrad), a very American character: a goodnatured Bible belter who doesn't seem to have actually read the book.

Off-camera, we referred to the duo of Czech-born Katarina and Romanian-born Irina (whose accent, for the record, is way more Cincinnati than Bucharest) "the Europeans"—well, once I learned not to call them the "Eastern Europeans" after being corrected a few times and looking at Google maps. But in the film, they're an ocean apart, with Nastasia's ever-present headphones and dismissive attitude forming a challenging barrier to Bess's cheery attempts to break the ice.

Few years ago, while filming an independent film in Dover, NH in freezing winter, I came up with a character of a Ukrainian Hip Hop Princess. My fellow cast member and I went to hang out to a local bar in Dover and because it was very cold, I decided to wear the director's wife's over-the-top long leopard coat. When we walked into the bar, we quickly realized we were total misfits and decided to play the part. Since they played hip hop and I love to dance, I decided to pretend to be a hip hop mega-star from Ukraine. Being originally from ex-Czechoslovakia and wearing a heavy ridiculous coat, it wasn't difficult to pull it off. My fellow actor friend at some point came to the DJ and asked him to give a holla to the girl from the Ukrainian 'hood. When DJ asked me what my name was, I simply said: Nastasia.

Nastasia stayed living in my brain for a while and when Justin called and asked me to create a character I always wanted to play for Inventory, Nastasia couldn't wait to get out of my head. The challenge became how to include a Ukrainian hip-hop princess in an all-American company of misfits working in a furniture store. But that was exactly it, she was as big of a misfit as anybody else.

Justin helped out big time to bring Nastasia to life. Not having a lot of improv experience, and being used to working with a script, I did find it challenging to adjust to the process, but Justin's guidance and patience eventually paid off.

Also, most of actors working on Inventory had worked with each other and Justin before and were used to the process. I found it very inspiring and learnt a lot from Dennis Hurley, Matt Carbo, and Christian Anthony as well as other cast members. Their wit and ability to think quick on their feet pushed me to challenge myself even more.

Nastasia as well as I have learnt a lot about creative process, fitting in, humility and growing up. Thank you for a wonderful experience.

Posted by Justin Fielding at 6:18 AM