Soundtrack artist: The Sun Sawed in 1/2 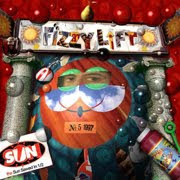 A few years back, we'd envisioned using a powerpop song score for a movie project that didn't quite take wing, and one of the first songs I'd fantasized about putting in that score was "Timpani Heart" by The Sun Sawed in 1/2, so I stashed a copy into a folder of favorites.

Once we decided to use such a song score for Inventory, I took a peek in that old stash and decided to drop "Timpani Heart" into the first scene we edited—an extended wordless sequence where pious clerk Bess hides Bibles in various pieces of furniture and a couple of other clerks play pranks on her, while the rest of the slackers vent their particular quirks.

It was serendipity on steroids. The idealized imagery ("She looks electric and new, C-major happy, my candy-coated petting zoo") and propulsive tunefulness brought the effervescent spark I craved.

And certain lyrics fell preternaturally into place. "Give into the glow" hit just when a novelty frog ring lights up, and "You know it's beautiful to wake up right now" lands when snarky libertarian Chuck awakens from a catnap.

That's all well and good, but for a no-budget film, a temp track is liable to be a road to nowhere. After months of loving the song in the rough cut, it was time to learn about music licenses and hope that several great bands would be willing to support a left-field independent movie.

With a little digging, I found contact info for Tim Rose of The Sun Sawed in 1/2, and he was the first of the many wonderful musical artists who would work with us on indie-friendly terms.

Here, Tim tells us a little about the song and his band:

Timpani Heart by the Sun Sawed in 1/2 was one of the tracks from our album "Fizzy Lift."

The track was written about the beauty of newfound love and the feeling of awakening daily to the sound of her heartbeat.

This was our second release produced by veteran producer, Keith Olsen at Goodnight L.A. studios in Van Nuys. Keith is famous for producing such acts as: Fleetwood Mac, The Grateful Dead, ELP, Heart, Whitesnake, Sammy Hagar and many more.

The Sun's sound has often been compared to classic 60s acts such as the Beatles and the Beach Boys owing to their creative use of melody and hooks. They were signed to the power pop label, Not Lame in 1995 who released their last two albums along with songwriter-guitarist, Tim Rose's release, 'Fresh Mowed Lawn,' recorded in Vienna, Austria and featuring members of the Vienna Symphony Orchestra.

The Sun is currently mixing their new album, 'Elephants into Swans,' in Vienna with hopes of a summer 2011 release date.

For updates, one may find the Sun's page on Facebook.

Posted by Justin Fielding at 5:17 PM