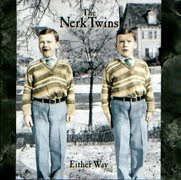 Note: I'll be posting separately about Shoes, one of the preeminent bands of the powerpop genre, who have three songs on the Inventory soundtrack.

In 1997, Shoes' Jeff Murphy teamed with his friend Herb Eimerman, now of The Britannicas, and made an utterly charming record under the name "The Nerk Twins," a handle borrowed from the world of Beatles trivia.

The title track from their "Either Way" album is a toe-tapping ode to off-beat camaraderie. What could be a better underscore for the mismatched counting pairs (and one floater) that inhabit Inventory?

We could buy a shack
Paint the windows black
Lock ourselves inside
And try to guess if it was night or day
You're my kind, either way

Herb and Jeff have both been very supportive of Inventory, and here they recall the song's creation. Herb leads off:

I had written the music for "Either Way" based around a 7th chord... showed it to Jeff and he wrote most of the lyrics for the song... when it came time to record we had so much fun with it and along with the clarinet lead and crazy violin parts we had a hard time getting thru the laughter to work on the song... the song was as much fun to make as it sounds.

Herb has recorded 5 solo cd's as well as Nerk Twins with Jeff Murphy of Shoes and The BRITANNICAS which is Herb's international recorded group and he has contributed to many powerpop compilation cd's.

Herb Eimerman: Just Barely Famous (Under The Dome Recordings)... There's more than a little irony and knowing chuckles in the humility that accompanies the title to the latest offering by Chicago's pop wunderkind Herb Eimerman. Despite a string of immaculately crafted and supremely melodic albums, Eimerman's talents inexplicably remain well below the radar. Eimerman, who got his start in the company of another sadly ignored outfit from Illinois known as the Shoes, may be humble in regard to his own accolades, but he's not shy about exploiting his own talents. In fact, he plays practically every instrument on Just Barely Famous. And while some may have doubts as to whether that singular exposition might somehow limit the album's depth of expression, there's absolutely no need to worry. Starting with the first track, the self-derisive 'Inside Joke,' Eimerman proves his prowess, constructing layers of vibrant melodic textures while providing a nuance that imbues it with a classic pop feel. Eimerman soaks up the influences of pop mentors from decades past... the Bee Gees, the Beach Boys and countless veterans of the so-called 'British Invasion' of the mid to late '60s - and recycles them with a sound and style that's instantly engaging and effortlessly accessible. And with sixteen songs and not a bad one among them, there's no lack of quantity to match the quality. It's a shame Eimerman has to resort to such self-effacing modesty; Just Barely Famous is an album that suggests far more potential than its humble title implies.

You can hear samples of Herb's work at: http://www.myspace.com/herbeimerman

All of Herb's cd's are available at: CD Baby and iTunes

Herb had started to write a song based on a 7th chord and it struck me as being cool and quirky, in a "Taxman" kind of way.

So I wrote the melody and lyrics with a "Bennie and Joon" slant. Where 2 people have their specific oddities and eccentricities, but they just connect and 'get it' with each other.

It was a fun song to play and sing and my slightly out of tune piano playing added another layer to the off-center feel. The vocal track was recorded by placing a mic inside the open lid of the studio's apartment grand piano and I sang into the piano's soundboard. As I attempted the violin in the instrumental section (to compliment Herb's clarinet), I started laughing and my horrible execution on the instrument only made me laugh more. We decided to keep the laughing (and violin squeaks) in the track, including my wheezing at the very end of the song. John Richardson had started playing drums for Shoes in mid-1994 and I tried to use him on as many studio projects as possible, so he was recruited to play the drums on the track. His interpretation was spot-on. It was all a real hoot!

Posted by Justin Fielding at 1:21 PM