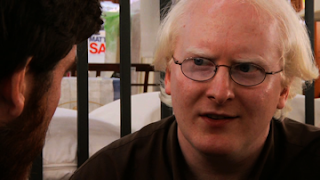 Anyone who makes a movie without casting Dennis Hurley is a fool.

I'm unfoolish enough to have made sixteen short films with Dennis, and now—with Inventory—two features.

In addition to playing Percy, a kindly and lonely furniture-store clerk, Dennis was a key collaborator in casting and story development, and he serves as Executive Producer on the film.

His recollections of the early days of the Inventory project:

I've worked a lot of retail jobs: KFC, Lord and Taylor, Starbucks, CVS and more... I had the fortune of never having to work on inventory day, but have always heard how frustrating and boring it can be, from fellow employees. So naturally I thought it would a great subject to tap into in a slacker comedy.

I was also happy to get a chance to really inhabit a character like Percy, and have the time to do it. You see, normally we only have a day or 2 till we shoot, because many of our films have been entries into timed film contests like the 48 Hour Film Project. This time I had months to develop my character's voice.

I enjoyed meeting with the cast early as we all developed our characters together.

As an actor who has to adjust to all kinds of sets, you can't ask for a better holding area than multiple rooms full of comfortable mattresses to rest on in between takes.

Posted by Justin Fielding at 1:08 PM