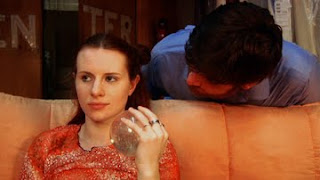 From the project's start, we've often compared Inventory to The Breakfast Club and Clerks, in terms of genre and milieu and several other French words.

One might also see a little DNA-similarity between Cat Miller's Zoë and the former's Allison Reynolds. Zoë is as inscrutable and feral as the moody Ally Sheedy character, but she's also a distinctly active presence: as physical and playful as she is brainy and, at times, harsh.

While the other eight clerks work in pairs, the ultra-detached Zoë was aptly assigned to be "a floater" (yes, one of the clerks tries to make hay with that), mixing it up with the four pairs of peers as the whim strikes her.

We first collaborated with Cat on The Observer, where she held forth on all manner of geeky topics with inspired improv based on, and fueling, the movie's overarching themes. Her Zoë again shows off Cat's brilliance with eccentric, high-status verbal banter. But even more so, it demonstrates a can't-keep-your-eyes-off-her gift for silent comedy.

Cat recalls the germination of the Zoë character:

I went to my first Inventory rehearsal a bit like a kid who hasn't done her homework. I knew that having a good character to play was entirely dependent upon my ability to come up with one, but I just hadn't given it the time I should have. Driving to rehearsal I thought over what would be fun for me—what am I really unlikely to get cast as in any other circumstances? My first, overwhelming thought was "it would be really fun to be incredibly weird." Of course, then I had to justify Zoë 's weirdness and build an entire character around that desire to say non sequiturs and hide out in small spaces. This definitely led us down some unexpected roads in developing her backstory—like me somewhat accidentally declaring her to be Jewish—but in the end I had a great time doing all the stuff I could never, ever do in real life.

Posted by Justin Fielding at 8:36 AM