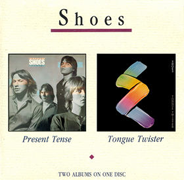 Shoes (brothers Jeff and John Murphy and friend Gary Klebe) not only cracked the code for tight, tuneful rock, they're true pioneers in DIY creativity, achieving in homegrown recording—beginning in the mid-1970s—what we indie filmmakers are now striving to accomplish in our medium.

It's been a pleasure and honor to get to know Jeff, initially while making arrangements to include "Either Way," by his side-project The Nerk Twins, in the Inventory song score. Jeff then served as our liaison to the famously egalitarian Shoes, who generously agreed to let us include multiple songs of theirs in the film.

Upon receiving that green light, I assigned myself the enviable task of re-listening to their entire catalog. While the aforementioned three discs are their most celebrated output, large numbers of my finalists came from lesser-known later albums like "Silhouette" and "Stolen Wishes." All told, it's a body of work with few rivals in the realm of post-Beatles pop.

Ultimately, I found that three songs were particularly suited to the available music cues in Inventory.

"Found a Girl" is as gorgeous a reverie on the tug between love and not-love as you're going to hear this side of 10cc's "I'm Not in Love." In Inventory, it hauntingly captures what's at stake for two clerks who keep their workplace romance a secret.

"Twist and Bend It" is a proudly lo-fi rocker that gives extra sizzle to a series of Inventory's comic-action montages, and the chugging "Cruel You" powers us through the film's climactic showdown.

Jeff Murphy describes the writing and recording of "Found a Girl":

Shortly after our return from England (recording the "Present Tense" LP) in the fall of 1979, my girlfriend of 5 years rewarded my monogamy with the news that she wanted to break up and end our relationship. We went on to attempt and abort a short tour in the early December and by January of 1980 we decided to cut our losses and get back to doing what we loved most; writing and recording some new songs for the next Shoes album.

In doing the numerous interviews and Q & A sessions to support "Present Tense," I met a female journalist that invited me over for dinner. She lived over an hour away, so she wrote directions for me on a piece of paper. I approached the situation with cynical skepticism stemming from my previous break-up and had no expectations. To my surprise, even though I got lost on the drive to the date, we had a great time! The relationship eventually traced the meteoric arc that is typical for people in their mid-20s, but I wrote this semi-biographical song as a result of that first, optimistic encounter.

In recording the track, the approach was unusual in more ways than one. First, there are no drums on the song, which immediately shifts the classification to that of a ballad, instead of the usual rock approach that we typically focused on. The rhythm guitars were unusual in that the "chords" were constructed by recording and layering each note of the chord separately through a gadget I had put together from an old tape recorder I had as a kid. The distortion it produced was a unique, buzzy tone with great sustain that we referred to as "synthesized guitar". John's bass line gave a great melodic foundation and we layered in some backing harmonies that swell in and fade out for a sweeping feeling. It originally appeared on our, "Tongue Twister" LP in 1981, but in 2007 we released the songwriting demos for the period of 1979-1981 on the double CD set, "Double Exposure."

It's great to see this track get another go 'round as part of the movie's soundtrack and we hope it helps contribute to the desired mood and feel of Inventory!

John Murphy on "Cruel You" and "Twist and Bend It":

Cruel You was another song about love gone wrong (our stock in trade!) but, in the last verse, the guy is so out of his mind with jealousy that he pulls a pistol on his estranged girlfriend. Much to his chagrin, she doesn't beg for her life... she still has the upper hand even though he has the gun. Some reviews at the time suggested that "when I pointed the gun at you" was a euphemism, which is fine... that works as well. But I really meant he was driven to the point of threatening murder, in a vain attempt at trying to control her.

Twist and Bend It was the last song I wrote for our album Silhouette after feeling I needed a full-on rock track. Lyrically, it's sort of stream of consciousness. When we recorded it, our drummer was MIA so Jeff and I cooked up the drum track. We did it piecemeal; Jeff engineered and I whacked the skins. BTW, the title came from the directions on how to use the wire ties from a box of plastic garbage bags ("Step 2: Twist and bend").

Posted by Justin Fielding at 3:30 PM