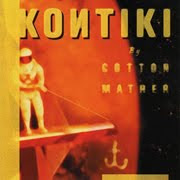 Cotton Mather's Kontiki album draws on classic powerpop influences, notably John Lennon, and yet it's utterly original and accomplished in its own right. There's a genius in the works, and his name is Robert Harrison.

In his 2007 book, Shake Some Action, John Borack rated Kontiki number 26 of his Top 200 Powerpop Albums of all time, comparing the album to Revolver-era Beatles, Big Star, and The Apples in Stereo.

In Inventory, the atmospheric "Homefront Cameo" from that record announces the arrival of menacing furniture-store owner John Panda.

"Homefront Cameo" is the second track off the Kontiki album, and like much of Kontiki it's a song influenced by having spent some months out on the road for the first time in support of our debut release. In the world of rock n' roll where one witnesses some pretty lousy behavior I was writing from the perspective of the woman left behind at home who is supposed to fall all over herself when her man comes home.

I recorded the basic track by subverting some Middle Eastern drum recordings I heard late night on the airwaves and bounced down to my four-track straight from the radio. I turned them backwards and got Darin Murphy to play along with them thus creating another layer of loops. This was my first experimental success with found sound, noise treatments and looping that I continue exploring to this day. Whit's guitar tone was especially wonderful on this track. It was fun to make, and like the rest of Kontiki it seemed like it was creating itself and I was holding on for dear life.

A desired side-effect of the Inventory song score is to open up indie-film audiences to wonderful music they've never heard of.

In talking with Robert, I find that my powerpop education is incomplete, since I've never (yet) caught up with the band Supergrass, which he—like many other aficionados of the genre—rates most highly. According to music mag NME, Cotton Mather shares the same stratospheric air, calling them among "the most exciting new guitar pop band[s] since Supergrass." If they compare favorably to Cotton Mather, consider Supergrass on my future radar... as I hope Cotton Mather and the other fantastic bands in the Inventory soundtrack will be on yours.
Posted by Justin Fielding at 1:15 AM