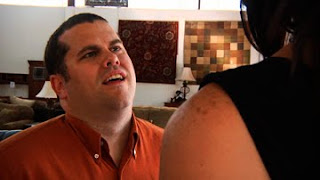 Played by Ken Breese, "Chuck Spratt" is a pot-smoking libertarian who's long on sarcasm and short on empathy.

Ken is a master of no-prisoners snark. For example, his response to his ex's "some people think I'm pretty" has proven to be the hands-down favorite line in the Inventory trailer.

In my cameo scene (also seen briefly in the trailer), as a customer who's mad the store is closed for inventory, Chuck distills the screw-you side of slackerdom to its essence. He has an ambitious itch, though, as he imagines himself one day climbing a corporate ladder. So, when crazy store owner John Panda threatens the store manager's job, it smells like an opportunity to him.

Ken's softer side and impressive musical pipes are on display as a laissez-faire dermatologist in our gross-out short (you have been warned!), Boil Alert.

One thing I've found when editing two features and a few shorts featuring Ken is that there are usually surprisingly few takes of his scenes. Sometimes I'll get a little panicky, that maybe we forgot to shoot some material. No, it's just that—even with improvised and semi-improvised content—he just nails it damn near every time.

As much as Chuck has a lot of me in him, we are different people. Sure, we both love questioning religious dogma, verbal abusing the weak minded and, of course, bong hits, but, man, Chuck is kind of an asshole.

We built Chuck from an extrapolation of some characteristics from a small role I played in Castparty's first feature, The Observer. My role in that film was of one of four "nerds" at a table in a diner discussing things like Dr. Who, Alan Turing and who should've really been cast as Wolverine. You know, nerd stuff. I had this aggressively combative, acerbic energy in those scenes, and Justin asked for the same kind of bite in his vision of Chuck.

I'm an improviser and was excited when Justin decided to let some of the background and story arcs come about naturally as a result of some improvised interactions between the actors in character.

I distinctly remember trudging down to Quincy (MA) one early weekend morning in particular. We were all kind of tired at first as Justin explained to us his vision of the film and some of the characters. As the morning went on and we all hit our required caffeine and sugar levels, we started to improvise scenes between some of the film's pairings.

I was paired up with Amanda Hurley, who ended up playing my ex-girlfriend Eleanor. Amanda is a lovely young lady, and one of the nicest people you'll ever meet, so, it was hard for me to think of her as someone I would dislike, or insult mercilessly. Luckily, Chuck did not have this problem. For a welcome change, my smart mouth was an asset, rather than a liability and we were able to get some good lines of dialogue and background story developed for the relationship between the two characters. I am happy to report that my favorite line that I threw out during that morning session made it into the film and the trailer.

My apologies to any Nickelback fans I might have offended. No, wait... you know what? I'm not sorry. They suck, and so do your ears for listening to them.

Posted by Justin Fielding at 11:00 AM