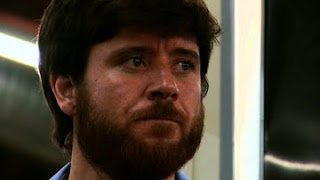 With no known training whatsoever, Christian Anthony showed up in Boston a few years back and proved to be a director's dream. Always funny, always original, always prepared, and always credible—no matter how ridiculous the situation or role.

He's also an outtake-machine, both because of his inspired improv and because it's often impossible for his fellow actors not to fall over laughing mid-scene.

From the title role in the absurdist short Telemarketing Orphan (2005), up through Inventory (2011), Christian has brought something special to every film he's made with Castparty Productions.

He has a particular knack for roles where he dominates another character with sheer force of personality, like a comedic Robert Mitchum.

And, fittingly, Christian's concept for the role of Greg in Inventory was "abusive tutelage." This made for ideal chemistry with Dennis Hurley, whose genius for sympathetic, harried, low-status characters makes him natural pickin's for the likes of Greg. (Though, do see the aforementioned Telemarketing Orphan, which shows each actor equally gifted at the opposite sides of such a dynamic.)

Now back in California, Christian recalls the making of Inventory:

I started working with many involved in this project when I first moved to Boston. We started out doing sketch shows in the basement of the Cantab Lounge in Cambridge. It is only proper then that we wrapped shooting for our very first feature-length comedy on my last weekend in the city.

Being a part of Inventory was tremendous. It was great to have the opportunity to mix the comfortable dynamic that was formed with many of the cast and crew over our years working together with the fresh addition of new, talented actors and actresses.

In developing my own character, I was definitely informed by the creativity that everyone else brought to the project. I decided to go with the well-worn adage to "do what you know." Therefore, I centered my character on the sarcastic asshole model I have come to love.

Thankfully, I had the honor of adding depth to this character by working closely with Dennis and even closer with Cat Miller. They inspired my performance and made Greg a better character. The energy and spirit of the whole cast and crew was amazing and the process was an incredible experience. I think that will come through in the final product for the audience.

Posted by Justin Fielding at 5:22 PM