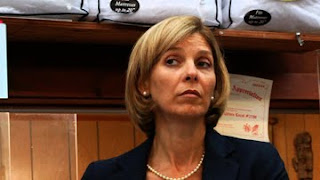 A consummate pro and a smart and cheerful collaborator, Chris Holliday has played likable moms in commercials for big-name clients like T-Mobile.

But our first experience with her, in The Observer, saw her as a deliciously nasty mother who disrespects her daughter's easygoing boyfriend.

So, we knew she'd be a perfect foil for a group of unapologetic slackers—as Barbara, the imperious furniture-store manager they love to hate.

Will Barbara's icy cool hold as the clock ticks down on an ultimatum from volatile store-owner John Panda? Therein lies the tale.

Chris recalls teaming with Castparty on Inventory and other productions:

I’ve told people that one of the reasons I became an actor after a long career in business and years of being a parent was that I was tired of being in charge. I thought that as an actor I’d let people tell me what to do for a change. So it’s somewhat ironic that one of the things I love best about working with Castparty is the artistic collaboration that takes place working with them. Rather than being told what to do, I discovered I love being part of the creative process. Go figure.

Meeting with cast and crew months before we started shooting to create Inventory was a blast! I remember someone bringing up an idea we'd been kicking around for one of the characters. I left the room for no more than three minutes and that idea had been added to my character, which, in turn, changed much of the story line. The “writing” moved fast, always getting better and better.

Filming was even more fun, as the characters came to life through our talented cast, Justin’s direction, and a dedicated crew. There are several moments permanently etched in my mind: Shelly/Jackie’s monologue of all the jobs she’d ever lost, including how and why(!), Dennis/Percy’s face after one particular scene—a classic combination of stunned delirious bliss and an unnatural shade of bright pink, Matt/Panda’s filthy and hilarious improv, Cat/Zoë and I concocting hiding places in the store for her eccentric character, the orange “makeout couch,” real-life store owner (and truck-driver character) Dave’s constant wisecracks, and my own first experience with a chainsaw (happily, no one was injured). What’s not to love?

Interestingly, this role, as well as my role in Castparty’s Making the Cut has prepared me for new roles as a stern, if not bitchy, boss. Having played all different kinds of moms prior to this, I never would have guessed that the hard-ass boss would become the role for which I’m typecast. And that’s just one of the things I love about being an actor—you never know what to expect. Inventory is full of the unexpected, which is what makes it so great. I hope people watching it have at least as much fun as we did making it.

Posted by Justin Fielding at 3:20 PM