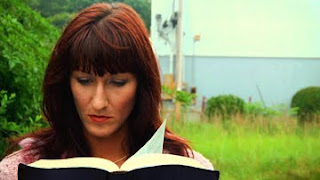 Late in our character- and story-planning process, we got the idea of pairing (as inventory-counting partners) Ukrainian hip hop diva Nastasia with a new character: a cheery Bible fanatic who has never actually read the book.

As the rehearsal phase was winding down, and we were preparing to shoot, an actress we had previously worked with was penciled in for the new role, to join the project when she returned to New England after a season abroad. Once she got home, though, she found herself overwhelmed by other commitments.

While we'd hadn't yet rehearsed or written (with our "scriptprov" approach, we usually worked in that order) anything for this new character, we were quite keen on that prospective duo dynamic. Suddenly, we needed to cast—and develop—a major character ASAP.

Facebook came to the rescue. For months, it had been recommending that I friend actress Irina Peligrad, who has memorably played edgy characters in numerous local films. I finally did, and soon after that, we met to discuss the movie, which was just days away from shooting.

After seeing clips from some of her films, where she's often cast as a domineering vixen or supernatural threat, I was quite unprepared for how she responded to a description of the various characters' arcs. With moist eyes, she kept saying "Aw!" to the story's revelations and milestones of emotional progress.

She showed not only an enthusiasm for the material, but also a sweetness and depth that would make her character "Bess" human and likable, not the one-dimensional religious phony that would be all-too-easy for a skeptic like myself to put forth on film.

Irina was incredibly mindful of all aspects of bringing Bess to life, making many great suggestions and helping create—and instantly mastering—new material that told her story in a way I think audiences are going to find convincing and compelling.

Irina's recollections of the Inventory project:

My involvement with Inventory resulted from a fortuitous twist of fate. I was taking a break from acting for the summer to pursue my other interests of sand, surf, and lying about, when I was contacted about Inventory’s last minute casting needs. The project had already been cast and character development meetings were underway, but one of the prospective actresses had dropped out. I was immediately interested, as I was familiar and impressed with Castparty’s and Dennis Hurley’s past projects. After hearing more about the story and process for the film, I knew I had to be a part of it.

They were in need of one Evangelical Christian, and as much as that would be the scariest character I have played to date (cannibal, crazed killer, and vampire being my common roles), I was ready for the challenge. And a challenge it was... I am not very well versed in Christian doctrine, or any aspect thereof.

I was raised on the atheist side of agnostic, and although I have tried to educate myself about religious thought, my knowledge of Christianity is limited to my cursory “Bible as Literature” college class. I tried to cram some Bible reading in leading up to my first rehearsal, but I didn’t have enough time to internalize it (or remember it). Justin helped set my mind at ease by helping me use my ignorance for character development.

I am so glad to have had the opportunity to work with this bunch of talented, witty, creative, and all around swell people! And the working conditions were great… Tempur-Pedics as far as the eye can see!

Posted by Justin Fielding at 11:40 PM