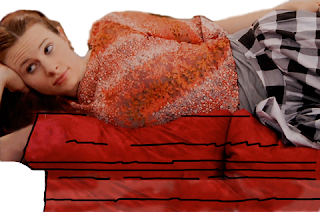 A curious thing about making movies is that you don't always know what influences are influencing you... at least not until after a film is completed.

Many of my filmmaking heroes don't, as best as I can tell, directly influence my writing and direction in a big way.

Well, there is perhaps a bit of Hitchcock about Castparty's comedy-thriller The Wife's Position and a little Kubrickian imagery in our psych-gore oddity, Denial.

However, I've gradually come to realize my biggest influence comes not from the world of film. Rather, it's from a steady childhood diet of Peanuts cartoons—both then-current strips from the '60s and beyond, and anthologized strips from before my time.

In project after project, I've found myself attracted to the intersection of the bitter and the sweet. The realm that Charlie Brown and company inhabit.

Since making the absurdist Telemarketing Orphan (from a script by Greg Hill), we've described many of our films as "sad, little comedies."

Some 40+ years after first reading Peanuts, the elegance of Charlie Brown's most famous utterance finally comes clear to me: "good grief." The comedy that comes from sadness, and the sadness that comes from comedy can be very, very good grief.

Beyond thematic resemblances, we've drawn up many characters in a Schulzian mode, especially numerous lovable poor schlubs played by Dennis Hurley, who in Inventory is guided by the domineering Greg much as Charlie often receives dubious and abusive tutelage from Lucy Van Pelt.

Jackie, too, with her bigmouthed aggression has more than a little Lucy about her.

Zoë shares many traits with Charlie's idiosyncratic beagle: quirky perches, imitating another character's gait, and riding on a fantasy surfboard. Perhaps the major difference is that Zoë is far more inclined to act like a canine.

I don't recall whether Zoë's Snoopyishness was ever something I verbalized in the course of shooting Inventory, or was even fully aware of, but there was something viscerally familiar about her playful inscrutability.

Then there's Eleanor, whose attachment to a humble armchair recalls Linus and his security blanket.

Further, the clerks mostly tune out authority figures, especially their immediate supervisor who barely says more words to them than the unintelligible adults do in Peanuts' classrooms and households.

Perhaps others who watch Inventory will find still-more resemblances, most all of which were unconscious, but which are indicative of how much I absorbed the tragicomic gospel according to Peanuts.
Posted by Justin Fielding at 5:55 PM