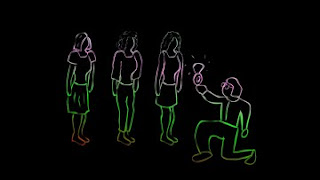 As can be seen in the trailer, a running gag in Inventory is that lonely clerk Percy, spurred on by his lascivious counting partner Greg, asks various co-workers (and others) what would happen if he were married to them.

The genesis of The Marriage Question was that, in the earliest days of Inventory's development, I was reading Anne Lamott's Bird by Bird on the recommendation of another filmmaker. It's a book of advice and anecdotes for writers, where she states at one point: "Say this boy meets a girl... he can't just say, Hey, let's get married!"

It struck me as amusing to have a character do just that—serially. It pushed a shy character into action, and it created big opportunities for other castmembers to react according to their own idiosyncrasies.

For example, I did a role-play on it over the phone with Shelly "Nunchucks" Finnegan, who plays a Jackie Chan-obsessed clerk. I still have the swear-marks on my ear, and we recreated that four-alarm reaction in the film.

Kevin Hammer reworked the title song into a "Marriage Question Theme," which appears in all manner of variations—as Percy goes about his quirky rounds—depending on the mood of the moment.

Because of the unique energy of each response to the "MQ," it's one of my favorite elements in Inventory. It was fun to develop, shoot, edit, and score, and I hope audiences will find it—and the rest of the film—fun to watch, too!
Posted by Justin Fielding at 3:53 PM