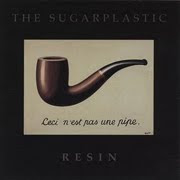 Over the last few years, the band I've listened to most is The Sugarplastic.

Given the chance, I'll play their entire catalog over and over again.

Most-often compared to XTC, they're almost always engagingly tuneful. But if Ben Eshbach, Kiara Geller, and company got the memo on conventional song structure, they tore it up... or more likely, they made whimsical origami out of it.

The two Sugarplastic tracks in Inventory are both instrumentals, so alas their witty lyrics aren't on display. However, as underscore in the first half of the film, they subtly set the stage for the many vocal songs to follow.

"Euripides the Jaguar" is an ambling, hypnotic guitar-based song, the first original the L.A.-based Sugarplastic ever recorded, and it perfectly suits the slacker clerks' lazy pace in the film's early going.

"Ben Takes a Walk to Lose Company and on the Way He Sees Some Ice Skaters," described by AllMusic as "just plain odd," slinks and scampers along like "Funeral March of a Marionette" re-imagined by Danny Elfman.

Ben, who wrote both songs, is also in a new band called Soviet League. They recently released a pleasingly eclectic self-titled debut that favorably recalls "Taking Tiger Mountain (by Strategy)"-era Brian Eno, which is to say awesomeness.
Posted by Justin Fielding at 11:30 AM